This week, the Gauteng Planning Commission hosted a Gauteng 2055 exhibition at Walter Sisulu Square, Kliptown, Soweto. Members of the Westonaria Borwa project team had the opportunity to spend a day at the exhibition with members of the West Rand District Municipality, which culminated in the launch of the Gauteng 2055 vision. The West Rand District Municipality’s display was alongside other exhibitors which included the City of Joburg that showcased the Lufhereng project, Basil Read with Savannah City, The Innovation Hub, Gauteng Treasury, Sanral, Department of Agriculture, the Johannesburg Development Agency, the Gauteng City Region Observatory, the City of Tshwane with the Automotive Hub and the City of Ekurhuleni amongst others.

The West Rand District Municipality exhibited some of their flagship projects.  The Westonaria Borwa project was prominently displayed with Posters and Layouts and a fly-through video of the 3D model of the development was played on a loop on one of the TV screens and Delta BEC presented the planned logistics airport for the West Rand, which is in the feasibility stage. 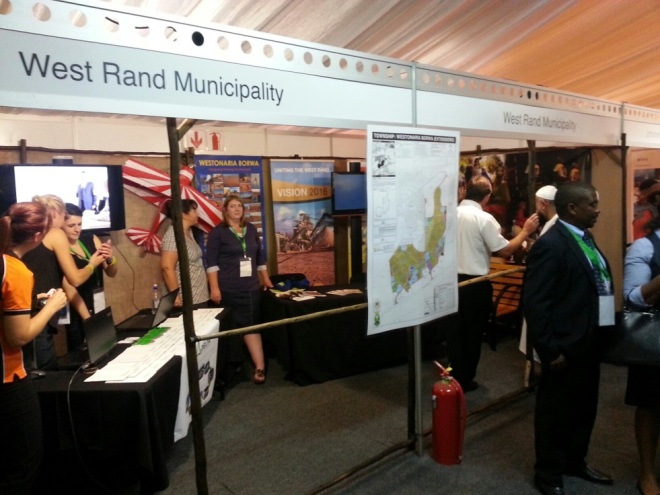 The exhibition was well organised and set up in a marquee tent on the historic Walter Sisulu Square in Kliptown, Soweto.  It was open to the public and well attended with many people visiting the stall and showing interest in the Project.  Later in the day all the VIP’s started to arrive with an entourage of media.  A number of high ranking officials including Ministers, MEC’s etc. visited the Exhibition. The highlight of the day was when Premier Nomvula Mokonyane came past the stall and even commented on what a good project the Westonaria Borwa Project is.  After she visited the exhibition, she launched the Gauteng 2055 vision which serves as the province’s blueprint to 2055 along with a 20-year review of Gauteng under democratic government leadership.

The exhibition was a huge success and it was great to have the Westonaria Borwa Integrated Development show cased among several other similar high profile, large scale housing projects and other exciting initiatives.